We've been cooped up for far too long, the Wonderdog and I. I've been crazy busy with work for several days now, tied to my computer and unable to go outside and enjoy this lovely late summer/ early autumn weather. Sadly the weathermen are telling us that after today we're in for a change, so we seized the initiative this morning and headed out into the elements to embrace the season. 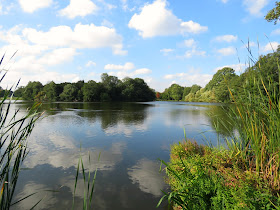 We trotted down the road to Osterley Park, our go-to place when we need some fresh air and can't face travelling too far to find it.

The Garden Lake was peaceful and serene ... until Maxi caught up a with a few of his doggy chums, which resulted in a gales of happy barking that rippled around the lake shattering the silence.

I always admire the way the roots of the trees grow out into the lake water here, and wish that my pot plants at home could learn to cope so well with my over-zealous watering regime. 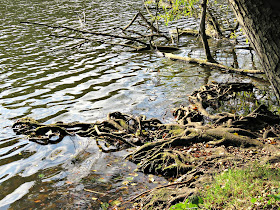 And we spotted a few conkers for Emi, still clinging to the chestnut trees. 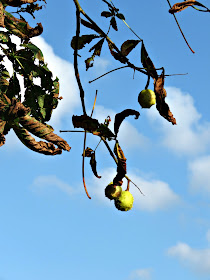 It felt good to be out in the sunshine, and happily we had lots of company. 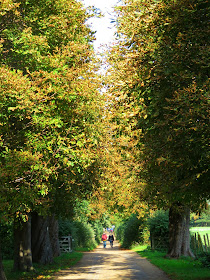 I love these artichoke heads. At home I'd not have been able to resist the temptation to chop them off after they'd gone past their best, but I couldn't help stopping to admire them in someone else's garden. 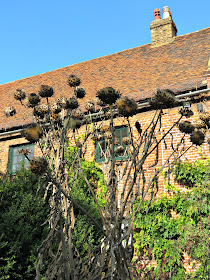 And, predictably, some of the autumn tints were really rather glorious. 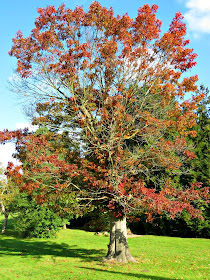 On our way back to the carpark we came upon this cluster of greedy pigeons, all chomping away on a feast of breadcrumbs. They looked so glossy and healthy that I stopped to take a photo. The Wonderdog, who is a bit blind and doesn't always pay attention, woke up the fact that we were looking at a writhing mass of live birds a couple of minutes later and started to bark furiously which sent them all flying off in a great grey cloud of feathers and crumbs. 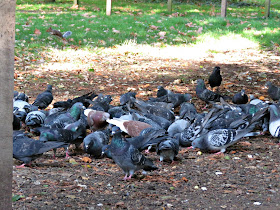